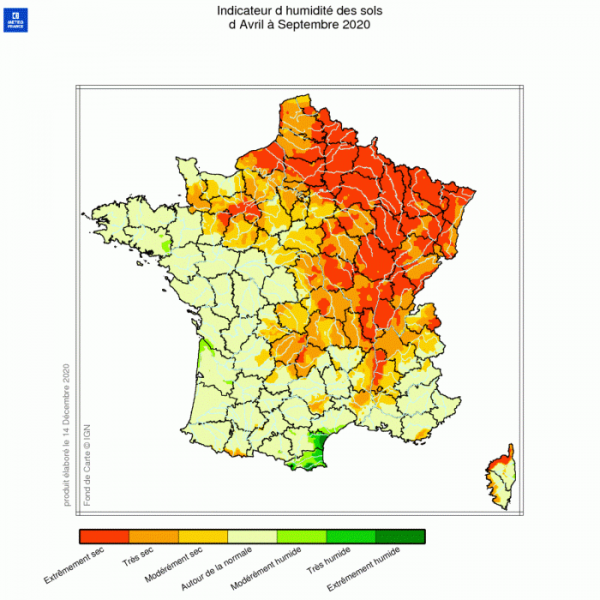 According to data from Météo France, 2020 is the hottest year la plus chaude registered since 1900. The average temperature of the year reached 14°C, while the normal average for metropolitan France is about 12,6°C (climatic normals over the period 1981-2010), ce qui signifie que the overrun reaches +1,5°C for this year ! 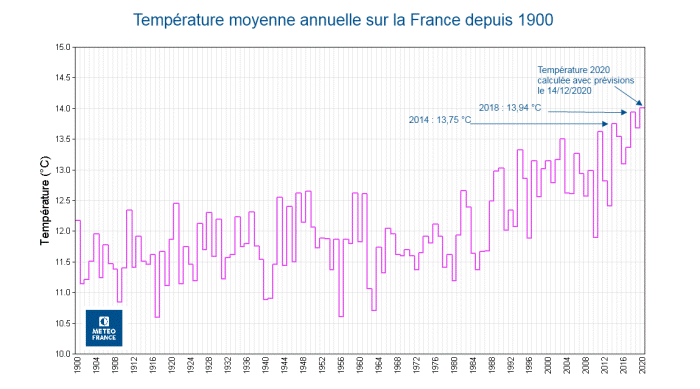 What happened during the year

The first three quarters of the year 2020 showed average temperatures each month higher than the normal temperature for the season for the months considered (normals calculated over the period 1981-2010).

We all felt it during confinement, the sun was very present et the temperature higher than normal. These temperature differences that we have experienced are very well illustrated by the map below : 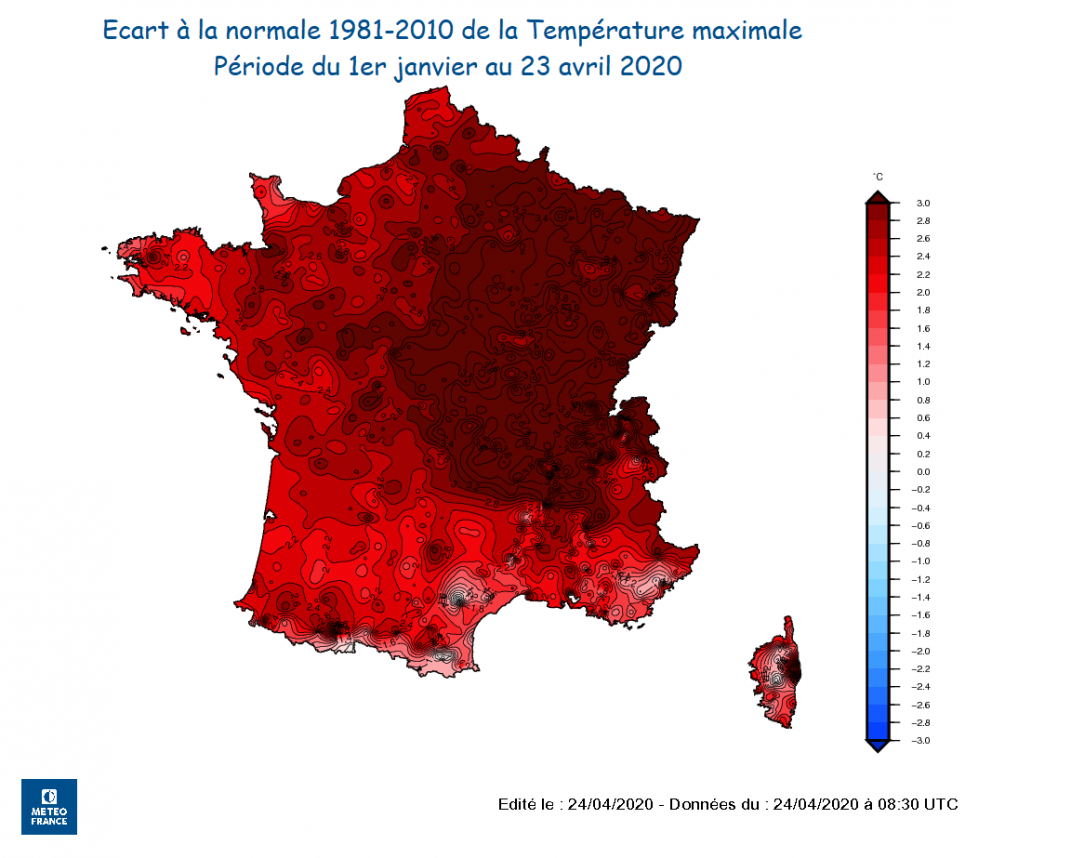 February was particularly hot, ranking second in month highest in temperature since the beginning of the 20th century.

March was very mild weather, while the months of april and august are placed in 3rd place of warmer months for these periods. In summer, two heat wave at the begenning of August have worsened the droughts, followed in september by a new episod of exceptional heat wave, exceeding 30 °C. 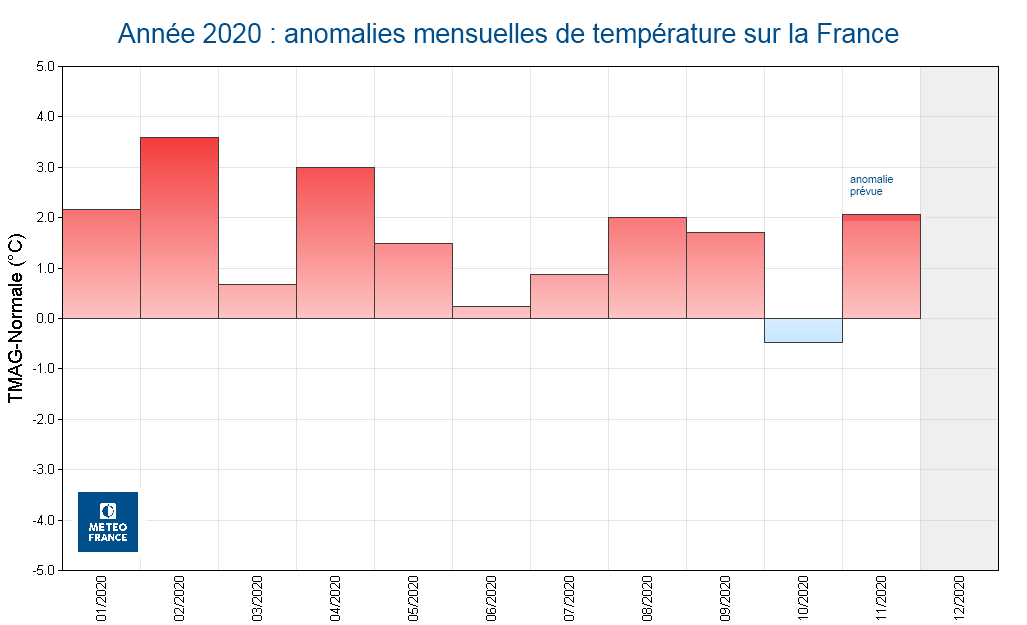 This is added to the lack of water, since the beginning of the year 2020. The winter will be remembered since january by par de high precipitation deficit, what was confirmed in the spring in april, july and november.

In the North-East Part of France, the high temperatures between spring and fall, associated with a significant lack of water, lead to drought period. The soils, which have not been replenished with water at spring, are thus completely dried up, this over a long period. 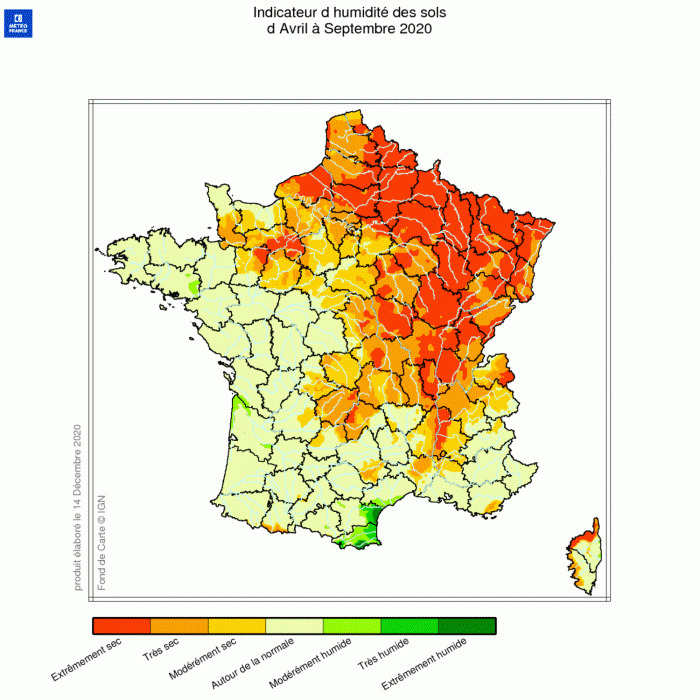 In certain regions, mainly in the eastern half of France, droughts accumulate over 3 consecutive years, which considerably weakens the vegetation year after year.

In the heart of our forests, the results are also very impressive : many diebacks are visible in our forests, due to droughts, sometimes aggravated by insect attacks (largely bark beetle).

In some forests such as Compiègne, ONF had to install information boards in order to explain to walkers these diebacks due to climate change and to chafer beetle, a small beetle present in very large numbers which mainly attacks Oak.

Even these nature reserves, like the site of Beaux Monts in Picardy, exceptional natural heritage of European stake, sees many ancient Oaks whithering away. According to the director of the Picardy agency, these wastes affect 80% of the area of this forest.

The bark beetle crisis has become a major issue in France, but also in other European countries, like Germany. Since 2018, the Spruces, mainly in the north-eastern quarter of France, are affected by this important water stress weakening trees, making them vulnerable to bark beetles. These beetles dig galleries just under the bark of trees, din the sap conducting vessels, which ends up blocking the flow of sap and generally causes the death of trees.

In total, many species are strongly affected with worsening mortality phenomena, even on species supposed to withstand summer droughts, like Scots pine.

Cumulative water stress over 2018, 2019 and 2020 strongly weakened trees, sometimes with a visible impact the following year with consecutive parasitic attacks .

all forestry organizations and stakeholders are mobilized to follow these developments. 2021 will not escape this vigilance, and it is certain that the situation and adaptation of forests to these changes become an emergency for our territories.